Our project is built on the conviction that the Qur’an has played an important role in the formation of medieval and early modern European religious diversity and identity and continues to do so. 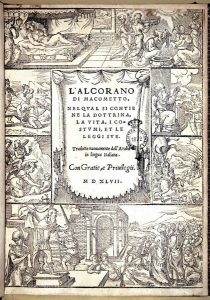 The Qur’an is deeply imbedded in the political and religious thought of Europe and part of the intellectual repertoire of Medieval and Early Modern Europeans of different Christian denominations, of European Jews, freethinkers, atheists and of course European Muslims. We speak of the ‘European Qur’an’ to emphasize the significant role of the Muslim Holy Book in various intellectual and cultural debates that took place in different parts of Europe, from Iberia to Hungary, over the course of the Middle Ages and early modern period (1150-1850).

EuQu is rewriting the history of the European Qur’an by placing European perceptions of the Holy Book and of Islam into the fractured religious, political, and intellectual landscape of the period from 1150 to 1850. We explore how the Qur’an played a key role not only in polemical interactions with Islam but also in debates and polemics between Christians of different persuasions and indeed is central to the epistemological reconfigurations that are at the basis of Modernity in Europe. The project studies how the European Qur’an was interpreted, adapted, used and formed in Christian European contexts – often in close interaction with the Islamic world, as well as with the Jewish populations living in both Christian and Islamic regions. Our multidisciplinary team of researchers studies various aspects of this European phenomenon, paying particular attention to:

To present a comprehensive historical assessment of the European Qur’an EuQu :