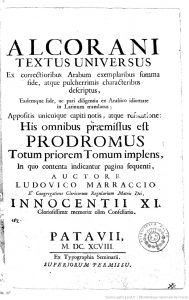 The expertise of the Principle Investigators (PIs) leading EuQu – Professors Mercedes García-Arenal (CSIC); Roberto Tottoli (Naples); John Tolan (Nantes) and Jan Loop (Copenhaguen) – covers both a diversity of linguistic and disciplinary skills and a wide geographical and chronological field from the Iberian Peninsular, to France, Italy to Central and Northern Europe and from the Middle Ages to modern times. In addition to a number of planned monographs and collected works, we are also supporting a wide range of Postdoctoral and PhD projects.