EuQu will organize major exhibitions at the Musée d’histoire de Nantes, the British Library in London, the Hungarian National Museum in Budapest and the Biblioteca Nacional de España. The exhibitions will trace the history of the European Qur’an from the Middle Ages to the present. 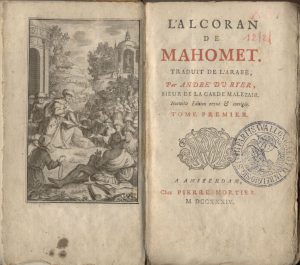 We will display (in physical and digital form) some of the most important manuscripts and printed editions of the Qur’an (in Arabic, Greek, Latin and various European vernaculars), as well as key works of exegesis, polemics, chronicles and material objects that show the place of the Qur’an in European cultural history. While the research of EuQu is focused the Medieval and Early Modern periods, the exhibition will take the story up until the twentieth century, paying attention to the use of the Qur’an in European scholarship, in the context of European colonization of Muslim countries, and in the daily practice of European Muslims. In order to ensure sensitivity to Muslims visitors and maximize impact on stakeholders, we will have local Muslim and intercultural associations participate in the preparation of the exhibition in each of the venues. We will also produce an online version of the exhibition and a catalogue (available in print and as an online interactive PDF) as well as digital animations and short .