Home » Volume 3 « The Iberian Qur’an » of our Series The European Qur’an is out !

Volume 3 « The Iberian Qur’an » of our Series The European Qur’an is out ! 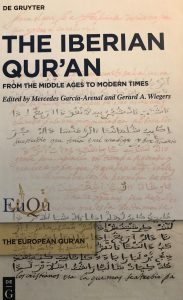 The Iberian Qur’an
From the Middle Ages to Modern Times

Due to the long presence of Muslims in Islamic territories (Al-Andalus and Granada) and of Muslims minorities in the Christians parts, the Iberian Peninsula provides a fertile soil for the study of the Qur’an and Qur’an translations made by both Muslims and Christians. From the mid-twelfth century to at least the end of the seventeenth, the efforts undertaken by Christian scholars and churchmen, by converts, by Muslims (both Mudejars and Moriscos) to transmit, interpret and translate the Holy Book are of the utmost importance for the understanding of Islam in Europe.

This book reflects on a context where Arabic books and Arabic speakers who were familiar with the Qur’an and its exegesis coexisted with Christian scholars. The latter not only intended to convert Muslims, and polemize with them but also to adquire solid knowledge about them and about Islam. Qur’ans were seized during battle, bought, copied, translated, transmitted, recited, and studied. The different features and uses of the Qur’an on Iberian soil, its circulation as well as the lives and works of those who wrote about it and the responses of their audiences, are the object of this book.