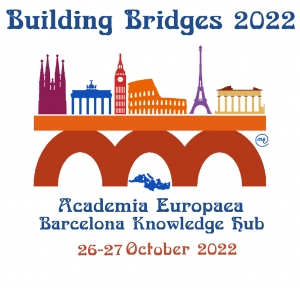 The 2022 meeting will be held at the Barcelona Biomedical Research Park (PRBB) on October 26 and 27, 2022.
Professor John Tolan from Nantes Université will be giving a presentation on the 26th of October.

Abstract of presentation
From 2010 to 2015, I directed an ERC program (advanced grant) entitled “RELMIN: The legal status of religious minorities in the Euro-Mediterranean world (5th-15th centuries)”. I hired a multidisciplinary team of scholars to study legal texts that defined the status of Jews and Christians living in Muslim lands and Jews and Muslims living in Christian lands. We produced a database of over 600 texts (original texts in Arabic, Greek, Hebrew, Latin and various European vernaculars; translations into English and French; analysis and bibliography). See http://telma.irht.cnrs.fr/outils/relmin/index/  We also organized workshops and conferences and published a series of 10 books (PhD theses and conference proceedings) with Brepols.
I am currently one of the four principal investigators of the ERC synergy grant program “EuQu: the European Qur’an”. Our team of over 30 investigators (PhD students, post-docs, senior researchers) study the impact of the Qur’an on European cultural, intellectual and religious history. See https://euqu.eu/
I have also served as a member of the ERC starting grant committee SH6 (history) in 2013 and 2015 and as chair of the committee in 2017 and 2019.
My contributions to this round table, based on these various experiences with the ERC, will focus on the opportunities that the ERC offers to researchers in the humanities and social sciences and on how to take advantage of these opportunities.

Biographical note
John Tolan works on the history of religious and cultural relations between the Arab and Latin
worlds in the Middle Ages and on the history of religious interaction and conflict between Jews, Christians and Muslims. He studied at Yale (BA classics), University of Chicago (MA & PhD history) and the Ecole des Hautes Etudes en Sciences Sociales (Habilitation à diriger des recherches: HDR). He has taught in various universities in North America, Europe, Africa and the Middle East; he is currently professor of History at the University of Nantes and member of the Academia Europæa and the Reial Acadèmia de Bones Lletres de Barcelona. He has received numerous prizes and distinctions, including two major grants from the European Research Council and the Prix Diane Potier-Boès from the Académie Française (2008). He is author of numerous articles and books, including Petrus Alfonsi and his Medieval Readers (1993) Saracens: Islam in the Medieval European Imagination (2002), Sons of Ishmael (2008), Saint Francis and the Sultan (2009), Faces of Muhammad: Western Perceptions of the Prophet of Islam from the Middle Ages to Today (2019), and Nouvelle histoire de l’islam, VIIe-XXIe siècles (2022). He is one of the four coordinators of the European Research Council program “The European Qur’an” (2019-
2025; https://euqu.eu/