The University of Chicago to award Professor Mercedes Garcia Arenal

Honorary degree in recognition of her significant contribution to her field of study. 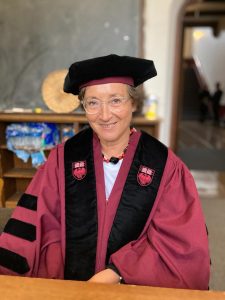 On the 4th of June 2022, the University of Chicago awarded honorary doctorates to four distinguished scholars: Cora Diamond, a philosopher at the University of Virginia; Katherine H. Freeman, an organic biogeochemist at Pennsylvania State University; Mercedes García-Arenal, a historian at the Spanish National Research Council and Principal Investigator of the ERC Synergy Grant Project « The European Qur’an »; and Nergis Mavalvala, an astrophysicist at the Massachusetts Institute of Technology.

Mercedes García-Arenal, one of Europe’s most eminent historians and a leading scholar of religion in post-Franco democratic Spain, will receive the Honorary Degree of Doctor of Humane Letters.

She has studied the Muslim inhabitants of Europe in the late medieval and early modern period; the Spanish Inquisition; and Iberian-North African history, opening new areas of inquiry in historical analysis and the study of religious minorities. She is currently a research professor at the Spanish National Research Council’s Institute of Languages and Cultures of the Mediterranean and the Near East.

A major area of focus in García-Arenal’s scholarship has been the study of the Moriscos—people whom the Spanish Crown forced to convert from Islam to Christianity—and their descendants. Her work on the history of Iberia and North Africa also has been transformational, examining how the flows of people and ideas changed both Islam and Christianity in the West.

With nearly 40 authored or co-authored books and hundreds of articles, she also serves as the sole historian and humanist on the scientific committee of the European Research Council. She is a recipient of Spain’s highest honor for academic research, the Premio Nacional de Investigación Ramón Menéndez Pidal.

Watch the video of the ceremony : https://www.youtube.com/watch?v=k8NcmteW0J8 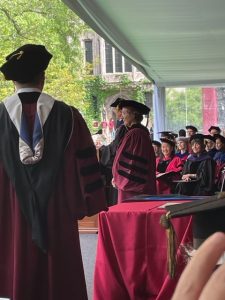