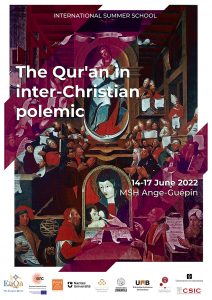 Theme:
How have Christian authors in Europe used and appropriated the Qur’an?   We are interested in how the Qur’an was used as a historical and linguistic archive, as a mine of heretical ideas and as a tool used in confessional rivalries. Our focus will not be restricted to the main confessional camps, Roman Catholic and Protestant, but will also include the many ways in which groups of the so called radical Reformation (Socianians and other anti-Trinitarian movements), different groups inside the Roman Catholic world, as well as Deist, Muslim and Jewish authors in Europe, used the Qur’an in their polemical writings. We will also study how translations of the Qur’an were deployed as argumentative weapons for preaching the superiority of Christianity to Mudejars and Moriscos in Spain. Additionally, the question of nationalist motivations in the collecting and translating of the Qur’an will also be taken into consideration: beginning in the late 17th century, various European countries vied with one another to produce the best translation of the Qur’an made directly from the Arabic.  We will further investigate if and how polemical and historical uses of the Qur’an changed in the late 17th and 18th century and early 19th century. The Qur’an continues to play an important role in polemical writings, in political as well as religious domains.

Format:
A series of roundtables with presentations of research by PhD students and postdocs.  Each roundtable will be hosted by two colleagues. Presentations may be made in English or in French.

Some photos of the event: