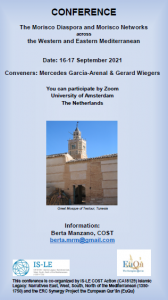 This workshop, co-organized by IS-LE COST Action (CA18129) Islamic Legacy: Narratives East, West, South, North of the Mediterranean (1350-1750) and the ERC Synergy Project the European Qur’ān (EuQu) brings together scholars who work on the (forced) migrations of Muslims from the Iberian Peninsula to other parts of Europe and the MENA Region between the fall of Granada (1492) and the first half of seventeenth century.

These migrations of groups and individuals took place in varying contexts and characteristics. Most migrations were induced by the repression of Islam and forced conversion and/or expulsion decrees between 1499 and 1609-1614, when the converted Muslims (Moriscos) were expelled from Spain. But there were also movements of Muslim refugees back to the Iberian Peninsula, especially between 1609 and 1640.

The focus is on the agency and leadership of the migratory movements, their networks, diplomatic efforts to influence the leadership of receiving societies (Morocco, the Ottoman Empire and its regions in Europe (e.g. Bosnia), the Middle East and the Maghrib) and the ways they used their spiritual, social, and economic capital to make a living in their Mediterranean Diaspora.

Welcome and Introduction. Leadership and agency of the Moriscos in Iberia and beyond.

Panel 1: Morisco displacements during the 16th century and beyond

15.00-15.30 Barbara Ruiz Bejarano
The “Caudillo” of the moriscos in France and the Ottoman-sponsored morisco diaspora

15.30-16.00 Luis F. Bernabé Pons
Money that binds. Some internal ties of the Moriscos in their Diaspora

Children of Al-Andalus. A Lost Paradise in Morocco (Amsterdam 2021).

Panel 2: Early Diasporas after the Expulsion

The Bodily and Natural Borders of Morocco’s Early Modern Empire: Changing Perceptions on the Conquest of al-Andalus and Bilād al-Sudān

Mediterranean Displacements: The Case of the Izquierdo Family

14.30-15.00 Catherine Infante
Images of Mary in the Moriscos’ Mediterranean Diaspora

Moriscos in Algiers (16th and 17th centuries): Identity and integration.

16.15-16.45.
Jaafar ben El Haj Soulami
The Exodus of the Andalusians to Morocco and the Ottoman regencies during the defeat of the Alpujarras revolution of 1568-1571: Mythological premises and historical consequences

“The powerful Moriscos” in Tunisia, from the beginning of 17th century to the middle of 18th century