Home » State of the art

State of the art

This section provides an overview of the state of the field, outlining how EuQu profits and builds upon a number of studies published in recent years, some of which have been written by project members. 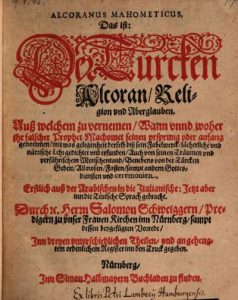 EuQu aims to demonstrate the extent to which the European Qur’an is an independent textual tradition (or web of traditions) which comprises part of the religious and cultural heritage of Europe. This is a departure from much of the existing literature, which, while of the highest scholarly quality, only provides a fragmented picture of European attempts to collect and translate the Qur’an. Scholars have generally focused on the study of individual actors or endeavours, or on specific linguistic, national and religious traditions. As a collaborative project EuQu aims to expand the study of the European Qur’an across chronological, disciplinary, linguistic and religious boundaries in order to understand it as a pan-European phenomenon. The groundbreaking nature of our project rests on the ways it approaches the history and development of the European Qur’an from a holistic, interdisciplinary, multilingual and multicultural perspective.

While this is a completely new and innovative way of conceptualising the history of the Qur’an, EuQu builds on the extant research which frames the Qur’an as part of European heritage. Particularly, it takes inspiration from Angelika Neuwirth’s groundbreaking Corpus Coranicum project which emphasizes the place of the Qur’an in the cultural history of Europe by seeing it as a product of the late antique Romano-Persian world. A number of recent studies have improved our understanding of the role that the Qur’an plays in European religious, intellectual and cultural life. They provide insight into the changing European attitudes and technical abilities to deal with the complex linguistic and theological dimensions of the Qur’an. They have also started to uncover the many ways in which European interaction with the Qur’an is related to inter-Christian religious, political and scholarly debates. Groundbreaking both in its philosophical rigor and historical breadth is Harmut Bobzin’s 1995 study of the Qur’an during the Reformation. Bobzin’s panorama of Qur’an translations in the context of early modern confessional conflict is flanked by two equally compelling studies: Thomas E. Burman’s Reading the Qur’an in Latin Chrisendom, 1140-1560 (2007) and Ziad Elmarsafy’s The Enlightenment Qur’an (2009). Alexander Bevilacqua’s The Republic of Arabic Letters (2018), has also recently shed new light on the continuities and discontinuities in European interaction with Arabic culture and Muslim religion from the 15th to the early 19th century.

Studies with a narrower focus have drawn attention to specific functions that the European Qur’an takes on in the writings of European scholars and theologians. It has become evident in recent years that the Qur’an was deeply entangled in the religious, political and cultural conflicts and debates that helped define the early modern European cultural and confessional landscape. Indeed, since the very beginning of the Reformation, the Qur’an played a central role in confessional debates, most prominently in polemics against so-called ‘Turco-Papism” and ‘Calvino-Turcism’, where the confessional enemy is systematically compared with Islam (Mout 1978/1988). During the 16th century, the Qur’an was mined as a historical document in writings on the history of Christianity and in inter-Christian debates, particularly among anti-Trinitarian authors (Champion 1992, Muslow 2010). Recent scholarship also suggests that literature produced in pietistic circles made frequent use of the Qur’an (Meggitt 2013; Matar 1989, 1998).

The Qur’an continued to play an important polemical role during the Enlightenment. In the writings of Prideaux, Montesquieu, Boulainvilliers, Voltaire and others the Qur’an becomes a polemical mirror reflecting political concerns of the day, but also a historical source on the nature and virtue of law (Elmarsafy; Loop-Bevilacqua 2018). Recent research by Bevilacqua and others has also indicated how instrumental the Qur’an was in the development of comparative studies of religious, political and legal institutions in the 17th and 18th century (Bevilacqua, 2018).

European efforts to translate the Qur’an from the Middle Ages to the 19th century, mainly into Latin but also into European vernaculars, have usually been studied with a focus on an individual translation, language or time period (see for example Tischler 2012, Cecini 2012; Glei 2012; Messaoudi 2015, and a recent PhD provides a thorough study of the first Greek translation (Ulbricht 2015)). Our understanding of early modern Latin translations has received a significant boost by new discoveries of archival material that give insight into the translating practices of Ludovico Marracci and Johann Zechendorff (Glei/Tottoli 2016, Tottoli 2015), and by innovative comparative approaches (Bevilacqua, 2013). The use of tafsir (Qur’an commentaries) and other exegetical and linguistic tools in the translating process has only been touched upon in research literature (Burman 1998; Burman 2004; Rippin 2006; Bevilacqua 2013) and still awaits a systematic study.

While there has long been a focus on Latin translations made directly from the Arabic, students of the history of oriental studies have begun to turn their attention to vernacular and aljamiado translations (Hamilton/Richard 2004, Tommasino 2013, López-Morillas 2011, Malcolm 2012, Feingold 2013). Vernacular translations moved in different social spaces and spheres than Latin translations, and they were driven by different interests – not least commercial, which in many cases played an important, but hardly ever studied role (cf. Bevilacqua 2013; Visser 1996) – and they also faced different regulatory challenges (see Tommasino 2013, Hamilton-Richard 2004, Vernet 2001, López-Morillas 2006, Wiegers 1994). A different matter altogether are the aljamiado Qur’ans- translations of the Qur’an made by European Muslims and for the use of Muslims living in European territories, such as Moriscos in Iberia or Tatars in the eastern part of Europe. The copying, translating and circulating of Spanish aljamiado Qur’ans has been studied in some detail and has improved our knowledge of how aljamiado Qur’ans often transgress religious borders. While they are produced for the religious use of Muslim minorities and of converts or pseudo-converts in Christian lands (cf. the Corana project directed by Martínez de Castilla and id. 2014) their translators and copyists when converted often worked for Christian translators. The reception of the Qur’an in Tatar communities and translations into Polish, Lithuanian and Belorussian are just beginning to attract the interest of scholars (Konopacki, 2010, 2015; Kulwicka-Kamiñska a. Łapicz 2013; Czerwiñski a. Konopacki 2015).

A number of printed European translations of the Qur’an are illustrated and thus provide us with important visual representations of the Islamic scripture in Europe. A systematic study of these illustrations is a desideratum but will profit from the outstanding work that has been produced in the context of Avinoam Shalem’s research project Crossing Boundaries, Creating Images: In Search of the Prophet Muhammad in Literary and Visual Traditions (particularly Saviello 2015; Gruber & Shalem, 2014). Preliminary investigations into the growing European awareness of the rhetorical and poetical style of the Qur’an (Kermani 1999; Loop 2009) also suggest that the Qur’an has had a much bigger impact on European literary traditions and concepts than has so far been acknowledged (see Irwin 2012).

The history of European collecting of Qur’anic manuscripts too has only received minimal attention from students of the history of the Qur’an (Piemontese 1996, 2008 and 2016). François Déroche’s groundbreaking studies on the history and the transmission of the written Qur’anic text have also yielded insights into the textual as well as the technical-scholarly conditions under which the Qur’an was read by Europeans in the Middle Ages and the early modern period. Also, in recent years different ways in which Qur’an manuscripts were looted, purchased, loaned, copied and lost have been incidentally noticed by scholars (Jones 1988; Loop 2012; Vrolijk et al. 2013; Hershenzon 2014; Ghobrial 2016). However, a systematic account of these collections and their connections to centers of oriental knowledge is a significant lacuna which the EuQu project is attempting to fill. Additionally, the existing research is usually restricted to Qur’anic manuscript traditions of the first 2-3 centuries AH, and our focus on the circulation of Qur’an manuscripts in Europe between the 12th and the 18th century complements and enhances these studies.

Little attention has so far been paid to European attempts to print the Qur’an or parts of it in Arabic. An exception is Bobzin’s overview from 2002, in addition to previous studies on the history of Arabic printing in Europe (Roper 2002; Duverdier 1973, 1982; Balagná 1984, 1986). New research into European printings of the Qur’an is not only shedding new light on economic and technical aspects and challenges, but also on the European understanding of the many different features they encountered in Qur’anic manuscripts and of the (philological and technical) decisions they made when printing certain features at the expense of others. The financial interests of publishers, editors, and translators, for whom the Qur’an often proved lucrative, has not received systematic study.

While previous research on the Qur’an in Europe has been limited in chronological and thematic scope as well as in its disciplinary and methodological perspectives, our project intends to produce a comprehensive account of the complex history of the European Qur’an. This allows us to address the question of how the European Qur’an has been conceptualized in a holistic manner across disciplinary, chronological and geographical borders. We believe that such a holistic approach can lead to a completely new understanding of the place of the Qur’an in the formation of European cultural and religious identities. It is also groundbreaking in taking the agency, work, culture and mediation of Muslim as well as Jewish communities in Christian Europe and the Dar al-Islam into account when studying the origin and history of the European Qur’an.